I can not add host cloud

I can not add host cloud, do not appear fields to fill in the name and if I save it gives me an error 500.
I have the same problem with Cloud flavor and Cloud projects.

You mean, only demo site? ralph-demo.allegro.tech ?

No, it happens in my production environment.
In fact it’s a little different from Demo, because this menu in the demo doesn’t appear: 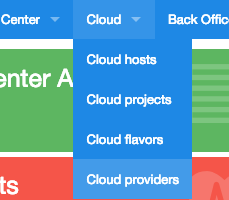 That’s in the Data Center section.

We used to import Cloud Projects from within API scripts, that’s why you probably came across some untested path. Should be easy to fix, though.

Creating an issue for this. https://github.com/allegro/ralph/issues/3438

Good thing we have a forum now so we can have a record for this question.

Cloud instances have never been designed to be managed manually – they are ephemeral and in real-life production environment it’s hard to imagine that someone is actually keeping the list of them in sync with the actual cloud. For smaller environments where cloud instances are permanent and are used like normal virtual machines virtual machines should be created in Ralph.

I think we have to make some additional comments about this in documentation.

Currently - GUI is misleading, allowing creating machines manually, and this is something we should fix. We should come with some simple explanation in documentation how to populate it through the API.

Another question is - why we have 500 there?

The UI is misleading indeed. However, we have no way to disable the UI button along with the other views so the change won’t be a one-liner. Is it worth to bring more complexity to the code when it is possible to work the issue around by using permissions?

Regarding the documentation – for sure it’s worth mentioning that in the appropriate documentation… if there was any. We have some plans to create a usable user manual during the next few months, which we will do, if we get some time assigned for that goal. Right now there is no documentation that can mention the fact cloud hosts should be managed automatically.